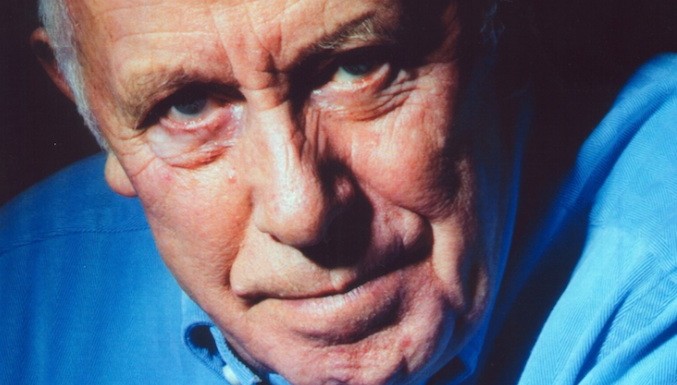 Glued to my parent’s old Ferguson set and its meagre four channels, I watched my fair share of 90s television. Chris Evans hosted The Big Breakfast and Cilla Black taught us not to be so fickle. But no one on the box quite seized the national psyche like the grumbling misanthrope, Victor Meldrew.

So it’s with fond nostalgia that I make my way to Sadler’s Wells, Islington, where the One Foot in the Grave star, Richard Wilson, is directing rehearsals for Smack Family Robinson – Richard Bean’s black comedy playing at the Rose until April 20.

Wilson, 77 this year, is on his lunch break in the stage door café when we meet.

“I never meant to be a director,” he says in his familiar, Scottish burr. “I started directing in 1968, but I didn’t want to stop acting.”

Dropping hunks of bread into his soup, Wilson sagely chews over my questions.

“When I went to RADA I was quite good at mime because I didn’t have to speak too much! There’s always a mime play at the end of the final term and I was chosen to direct it, although I’d never directed before.

“Once I did it, I found I enjoyed it. I’ve always preferred to direct new plays. That’s what I do mainly.”

Among his directorial highlights is Primo – a one-man show with Antony Sher (a good friend, for whom he was best man during his civil partnership ceremony) which ran at The National and on Broadway.

Richard Bean has enjoyed enormous popularity since his play, One Man, Two Governors starring James Corden, hit the West End stage, but Wilson’s relationship with him goes further back.

“I directed two of Richard’s very early plays. I’ve known him for a long while,” says Wilson.

Smack Family Robinson first premiered at the Live Theatre, Newcastle, in 2003. The play centres on the Robinsons, who have run a successful family business since the 1960s. The “business”, however, is a front for a lucrative drugs operation.

The play features a stellar cast, including TV baddie Keith Allen, who as Sheriff of Nottingham so joyfully thwarted Robin Hood in the BBC’s eponymous drama, as well as Loose Woman Denise Welch and Harry Potter’s muggle cousin, Harry Melling.

Bean has skilfully adapted the play for Kingston audiences, with plenty of local laughs.

“Because of old times, I read the script and found it very funny, and I said I’d do it – not quite realising where Kingston was!” Richard admits.

“He did it to make the play more relevant to the area,” says Wilson. “He’s thinking of franchising it and taking it to different parts of the country. We did a read through for the Rose Theatre people, and they laughed a lot at the geographical references. He’s got it pretty accurately, I think.”

Now that he is more familiar with the area, I ask for Wilson’s impressions of Kingston’s theatre.

“I went over to see it and we’re all looking forward to it.

“I prefer working in studio theatres because I think you get a better standard of acting, simply because you don’t have to give out so much. You don’t have to fill a 2000 seater. It’s about subtlety.

Always subtlety. And that’s what I’m after. But Kingston is not too big. It looks a nice theatre.”

Awarded the OBE for services to drama in 1994, Wilson took to the profession late, initially training as a laboratory technologist in Greenock. Following a spell of national service in Singapore, he decided the time had come to put a foot on stage.

“I was an amateur actor, and I always had a sort of secret hankering to become a proper actor.”

“If I moved to London there was the possibility I might get to drama school. So at age 27, I decided to try. I thought if I don’t try now, it’s probably going to be too late. And RADA was one of the few drama schools that took people over 25. I applied and eventually I got in.”

“I joined when I came to London, mainly because I felt the gap between the rich and the poor was rather too large for my liking, and I thought that was very unfair. I was very poor myself at the time.”

Richard has since enjoyed an eclectic career on screen and stage. On TV, he appeared in household favourites, including The Sweeney, Some Mothers Do ‘Ave ‘Em and, rather memorably, as Mr Bean’s dentist. On the big screen he appeared in David Lean’s last film, A Passage to India.

However, he will be perenially best known for David Renwick’s sitcom One Foot in the Grave (1990-2000), for which Wilson won two Light Entertainment BAFTA Awards and the British Comedy Awards Top Television Comedy Actor.

“I think it was Mark Lawson who called David Renwick the Beckett of sitcom,” says Wilson, mopping up the last of his soup.

“David introduced a darker side to sitcom in a way. He was very keen on switching from high farce to dark tragedy in a split second. I think he was a pioneer in that field.”

Wilson speaks warmly of his Victor years, which earned him loyal fans.

“I initially turned it down. I’m very glad I did it, or course, because it did become very, very popular.”

“Victor was 60 when the series started, and I was 55. Rather foolishly

I thought I was too young to play the part. But Susie Belbin, the producer, was very persistent. David says he wrote it with me in mind.”

To this day, Victor’s perplexed lament, ‘I don’t believe it!’ occupies a special place in the language of calamity. But the adage has become something of a burden.

“It was never meant to be a catchphrase. It was just something that Victor said quite a lot. And when David Renwick realised it was a catchphrase, he began to ration it. Some fans get quite insistent, asking me to say it. So I just made a rule that I wouldn’t. And that’s particularly hard for kids.”

In the final episode of series six, Victor is killed in a hit and run accident. Adoring fans paid their tributes.

“People were leaving flowers and cloth caps at the scene of the accident,” Wilson chuckles. “Taxi drivers still say to me all the time, when are we doing more One Foot. And I say, well, we’re not, he’s dead. I think David just felt he’d written it.”

“I’m often asked do I regret doing the show. Of course I don’t. It changed my life. I think they mean, because it became so iconic, it could have been dangerous for the rest of my career.

“But in terms of acting, One Foot was a particular favourite, because it was a leading part. I was the eponymous hero.”

Since then, of course, his career has continued to develop and nowadays, younger viewers will best know him for his role as Gaius in the Arthurian drama, Merlin.

“Merlin came along at a time when there was nothing very much happening on the acting side. There’s not so much work around for older actors, and I’d never done anything like it before.”

“When we were doing the location work in France at a little place called Pierrefonds, fans used to come from China and Japan just to sit outside the castle. Amazing – a real cult following!”

With iconic comedy and English legend under his belt, what will Wilson turn his attention to after the Rose?

“I don’t have any acting plans at the moment, not because I’m changing – I’ve always wanted to carry on doing both acting and directing – but as I get towards the end of my career I would like to do a little more teaching,” he adds, rapping his knuckles on the table in a distinctly Victor-like manner.