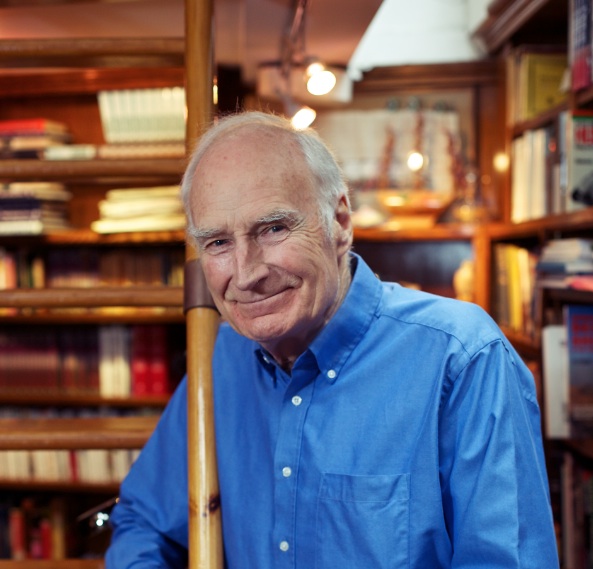 British journalism has known sunnier days. In the hacked-off, post-Leveson, post-Savile world, its place on the scale of public opprobrium hovers somewhere between energy companies and the banks.

Thank goodness for Peter Snow CBE, military historian and former Newsnight and Tomorrow’s World presenter whose new book, When Britain Burned the White House, has been published to considerable acclaim.

This morning, at his home in Barnes, I’ve caught him in the middle of breakfast. While he finishes, I glance admiringly at the collection of curios speckling his copious library and lounge.

“Roger, Roger!” he bellows, taking to his armchair, indicating that the chat can begin. A large bust of Lloyd George – great-grandfather to his wife, broadcaster Ann MacMillan – watches intently from the hearth as I ask the 75-year-old about the obscure act of war, two centuries ago next year, that forms the subject of his book.

“It was only three years ago, while writing a book about the Duke of Wellington, that I learned how some of the guys who fought with him were redirected to America when the ball was finished with Napoleon,” explains Peter. “I was staggered.”

Barely remembered in Britain, where its status is that of a sideshow to the larger, Napoleonic conflict, the War of 1812 lasted from June of that year to February 1815. It was the Americans who started it, believing – quite rightly, says Snow – that Britain’s war with France was interfering with trade. They also resented British support of American Indian tribes and the impressment of US merchant sailors into the Royal Navy, and may even have had their eye on a possible annexation of Canada.

In 1814, Ulsterman Major General Robert Ross was chosen to lead a force of 4,500 men across the Atlantic with instructions to give the Americans “a good drubbing”.

“They went into Chesapeake Bay to hit the prosperous towns and found that they could march unimpeded the whole way to Washington. Just before they got there the Americans finally appeared, but the British marched straight through them. The Americans just ran. President Madison and his wife fled the White House.”

What followed was not exactly Exhibit A in the much-vaunted Special Relationship that was later to evolve between Great Britain and her former colonial possession.

“When the Brits entered the White House, there was a lovely smell coming from the dining room, and on the table was the supper that had been laid for the President, his wife and all the expected victorious generals. So in walk the Brits, they sit down and tuck into the supper. Then the general in charge said: ‘Right, chairs on the tables and burn the place down.’

“That was the nadir, the low point of the Special Relationship with America. From then on, Britain and the US began to see that they had far more in common than they had to argue about.”

War is a terrible affair, as testified by the daily stream of images from Syria. So what draws Peter to the subject?

Snow seems puzzled by the question, as though he’s never really given it much thought.

“It’s partly a human fascination with people being driven to the ultimate act of killing each other,” he says rigidly. “It’s obviously extremely disturbing, but fascinating too. But the real thing about war is that it changes the map of the world. It is the thing on which we base our political entities. And so I think that explaining why wars happen, and what happened when they were fought, is very important. You can’t avoid it. It is essential to history.”

But there is also an element of habit.

“I do it simply because I covered a lot of wars as a journalist, on the ground or in the studio. It just has fascinated me.”

Journalism has no family roots for Peter, but his background does hint at his future absorption in world and military affairs. Born in Dublin to an Irish mother and English father – a brigadier in the Light Infantry – he travelled extensively as a child on account of his father’s army postings. Libya was one port of call.

“I was in Benghazi from 1949-51,” he recalls. “That was when King Idris was in charge. No sign of Gadhafi then. Later, as a journalist, I followed Libya with a particular fascination. It’s a beautiful country and I have lots of friends there.”

After Wellington College, at Crowthorne, and Balliol College, Oxford, Snow entered broadcast journalism. What drew him to the profession?

“I’ve always kept a diary and I like explaining and studying things. I just liked knowledge, really. So journalism came naturally – telling people what I’d done and seen. Mind you, what I really wanted was to go into the theatre, but I was soon told ‘no thanks’.”

Though not before he had auditioned to succeed Sean Connery as the next James Bond.

“I’d have done it much better than Roger Moore,” he quips. “But at 6ft 5, I was rather too tall. Later on people said I’d have made a good Q.”

Still, in the lottery of life, Peter’s ticket could have been worse. For in 1962 he landed a job at ITN as sub-editor and newscaster.

“I became a diplomatic correspondent and travelled abroad a great deal. It was a wonderful job that gave me a huge view of the world. I reported from everywhere – literally everywhere.”

At ITN, and later at the BBC, Peter’s theatrics were regularly brought to bear upon general election night, coverage of which he livened up no end with his excitable analysis of events. He even took over the famous BBC ‘Swingometer’.

“I’m just an enthusiastic guy!” he says (enthusiastically). “I do like explaining things, and the wonder of television is that you can illustrate them too. It’s a great challenge to bring the story alive. Explaining a general election is the best job on TV. It’s such an important event in our lives. To be right on the front of that programme is very exciting.”

In 1980, Peter became a main anchor of the BBC’s newly launched Newsnight. It’s a programme for which he retains an immense warmth.

“There’s lots of wonderful stuff we did,” he recalls. “Interviewing Mother Teresa, and not quite knowing what to ask her – what do you ask a wonderful woman like that? I interviewed Gadhafi too. That was fascinating.

“I remember the collapse of Thatcher. The Tory party suddenly opened up and you saw these dreadful wounds exposed. Then there was the Gulf War and the Falklands – I hope we brought them alive for people.”

Newsnight, of course, came under fire twice last year, first for the withdrawal of its investigation into Jimmy Savile, and again when Tory grandee Lord McAlpine was wrongly implicated in a child abuse scandal. What is Peter’s take on all this?

“Mistakes are made in a lot of programmes,” he says, rallying to the defence. “These two were serious, as they related to something far, far bigger. So it was just terribly bad luck that Newsnight made two, rather elementary, but nevertheless bad editorial errors in dealing with that dreadful subject. To call it a scandal is an exaggeration.

“Programmes like that are being made with smaller and smaller budgets. Decisions have to be made very quickly, which leads to the occasional slip. It’s very sad that it happened to Newsnight.”

By neat symmetry, it was the year when Peter first anchored Newsnight that saw the Snows move to Barnes.

“It was very convenient for the BBC, which was still at White City back then. So it was a natural place to live. It’s wonderful. We’re right on the edge of the common, where I used to go running.

“Richmond is a lovely place. It’s got that wonderful Orange Tree Theatre, which we’re very fond of. It’s just a terribly nice part of London. Very green, full of fascinating people – a charming place to live.”

Six years at Tomorrow’s World, after he left Newsnight in 1997, earned Snow further affection – and some good tales.

“The hot water bottle you put in the microwave wasn’t very clever – the thing burst!” he whoops, spreading his hands explosively. “And I remember a 17-position golf club, which had this head that you moved round. Of course the thing quickly became loose and it was completely useless. We had great fun.”

The show was axed in 2003, shortly after Snow’s departure. A tragedy, he believes. But while tomorrow may have been cancelled at the BBC, the Snow family continues to advance. Peter’s son, Dan, is a respected historian and broadcaster, and the pair co-presented both Battlefield Britain and the follow-up 20th Century Battlefields for BBC2.

“Dan always says I didn’t want to work with him, but that’s not true. He’s just being modest. I was thrilled when the BBC suggested it. I knew he’d make a wonderful presenter of military programmes. I’m very proud of him.”

The talent of the father has been visited upon the son. There is hope yet for British journalism’s young guns.

Interview with Sir Roger Moore
Cable: ‘Politicians are even less trusted than bankers’
Tweets by @RobertPEdwards