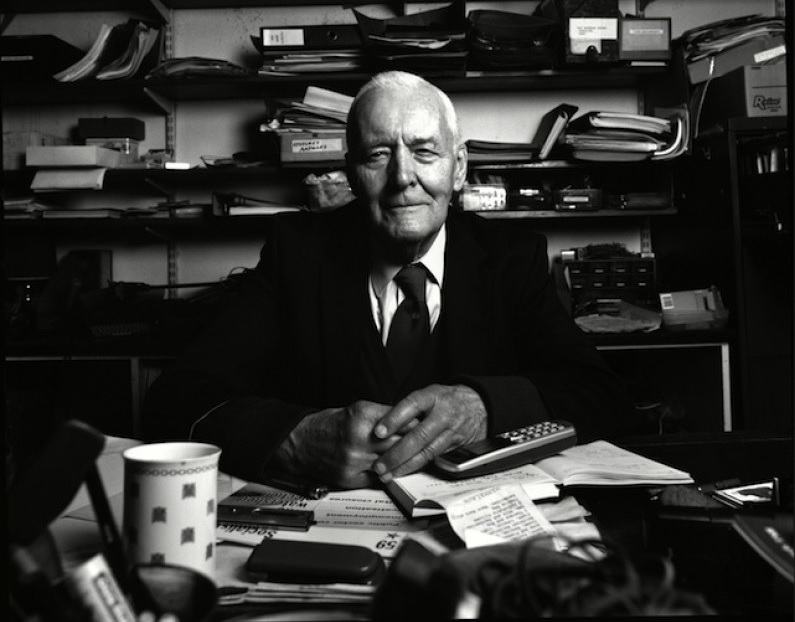 Notting Hill is as happening as I remember, minus the carnival atmosphere of my last visit. I am navigating the broad Victorian streets in search of Tony Benn’s new address; a small flat a stone’s throw from his grand old family home, sold only 18 months ago. Benn’s downsize does not reflect a scale-down in his activism though – his regular speaking tour comes to Guildford’s G Live this month.

“Have we met before?” asks the Old Labour stalwart, as I settle into his living room, an Aladdin’s cave of labour movement relics and family photos. I recap our past meeting at the Black Country Museum, where Benn was invited to mark the centenary of the local chain makers’ strike. The kettle has boiled, and the affable host returns with a coffee mug commemorating that very event.

Benn was born into politics. Both his grandfathers were MPs, and his father served in Ramsay MacDonald’s first Labour cabinet as Secretary of State for India. His first visit to Downing Street was at the tender age of five.

“Well, it means I have a very long political memory,” says the 87 year old, sinking into his armchair. “Ever since I was a child I’ve been interested in the world we live in.”

Long swimming against the political tide, Benn is famed for his stoic idealism.

“My mother was a very religious woman. She taught me to believe that all issues, political issues, were basically moral issues. Is it right or is it wrong? It helps you see your way through.”

In 1950, after a spell with the BBC in North America, Benn was elected Labour MP for Bristol South East, aged just 25, before going on to serve in the cabinets of Harold Wilson and James Callaghan.

“When I got to ministerial level, I realised how the country was really run and I moved to the left,” he explains, packing his pipe from a leather tobacco pouch. “I began to understand that the Labour Party was not there to change society, but to try and make it work better. A lot of the things that were done were actually contrary to what we believed – but agreed by the cabinet.”

An unremitting opponent of spending cuts and pit closures, Benn clung to traditional Labour Party values during the Thatcher years. Meanwhile, Labour endured an internal struggle which, by a long and winding road, would eventually bring Tony Blair to the leadership.

“New Labour was basically a Thatcherite party,” Benn claims. “When Mrs Thatcher was once asked her greatest achievement, she said New Labour. And that sort of summed it up.”

The enduring legacy of the Blair years is undoubtedly the invasion of Iraq in 2003. As President of the Stop the War Coalition, and an ardent supporter of the Campaign for Nuclear Disarmament, Benn is a critical authority.

“I think it was a war crime,” he says, clutching his still unlit pipe. “Desmond Tutu said recently that he thought Blair should be sent to a war crimes tribunal, and that is a problem Blair will have to live with until the day he dies.”

While the mass demonstration against the war ultimately failed in its primary aim, Benn believes that it established the public’s opposition.

“Governments can grow out of touch with public opinion,” he submits. “People don’t want to see war used as a regular instrument of policy.”

“I don’t think it will survive the election,” he muses. “Austerity is making the situation worse. When you lay people off, they have no money to spend, and so the economy suffers. Cuts are an instrument of the right, and they don’t really deal with the basic economic problem, which is that we’ve lots of things to do and a lot of people who’d like to do them, but we haven’t got the jobs. The Government is stoking up opposition.”

A Labour victory then?

“I think Cameron is a Thatcherite, and I don’t think people want that. So I think there will be a Labour government. But the battles will go on within the Labour Party.”

Benn is just as forthcoming about his personal life. He proposed to his wife of 51 years, American author and educationalist Caroline DeCamp, only nine days after their first meeting. She passed away in 2000 after a long battle with breast cancer.

“She’s had an enormous influence on my life,” he says softly. “It was very distressing, those last few years before she died. But she once said: ‘I see death as an adventure.’ And so, in a way, she taught me how to die, as well as teaching me how to live.

“I discussed the question of whether I should stand again with Caroline. She was the one who said: ‘Why don’t you say that you’re leaving Parliament to devote more time to politics?’

“It was her decision, her phrase, and that decided me. And I have been very, very busy ever since. There is a role in society for just campaigning for what you believe in.”

With son Hilary now in the Shadow Cabinet, a new generation of Benns is firmly established in the political arena. What does the future hold?

“There is a lot of disillusionment and anger at the moment, which is the main instrument to put strength into campaigns. I think the misdistribution of wealth is one of the big problems in our society, and therefore taxing the wealthy and using the money to create jobs is probably the right economic policy to follow.”

He pauses a moment, his pipe poised at his lips. “You mustn’t be cynical,” he reflects. “Be critical, but not cynical of political processes. You have to realise, if you keep up the campaign there is hope. And hope is a very important ingredient in politics.”

Twickenham Studios at 100
Interview with James Dreyfus
Tweets by @RobertPEdwards