BOGOTA, Colombia: Conflict has been the primary driver behind a rise in hunger across the Near East and North Africa (NENA) since 2015-17, according to a report published by a coalition of aid agencies on Thursday, which also identified a wide gap between those Arab countries embroiled in hostilities and those at peace.

The report, titled “Regional Overview of Food Security and Nutrition in the Near East and North Africa 2020: Enhancing Resilience of Food Systems in the Arab States,” assessed food-system resilience and nutrition in 22 countries stretching from Tunisia in the west to Yemen in the east.

According to its 2019 estimates, about 51.4 million people in the region — around 12.2 percent of the population — were already going hungry before the COVID-19 pandemic, which has further exacerbated disruptions to supply chains and livelihoods.

About 137 million people in the region were deemed to be either moderately or severely food insecure, lacking regular access to sufficient and nutritious food — a trend that is expected to worsen unless measures are taken to improve systemic resilience. As a result of this trend, the report predicts the region almost certainly will fail to meet its commitments under the UN Sustainable Development Goals to eliminate hunger by the end of the decade. In fact, based on its current trajectory, the number of people affected by hunger is expected to rise above 75 million by 2030.

“The wave of instability and conflicts has applied stress to food systems, with the direct and indirect effects manifesting in several ways. But the most visible consequence is the massive wave of forced migration, both internally and between countries,” Abdulhakim Elwaer, UN Food and Agriculture Organization (FAO) representative for the NENA, told Arab News.

“For example, according to the report’s findings, as of 2020, 5 million Syrians were dependent on aid from the UN World Food Program (WFP). In addition, Lebanese workers now compete with Syrian migrants for agricultural jobs, increasing rural unemployment and poverty and obstructing food access.

“Meanwhile, in south Yemen, 29.8 million people were reported to be acutely food insecure in 2020, mainly due to the impact of violence, alongside other pre-existing socioeconomic conditions.”

The report is based on a collaboration between FAO, the Economic and Social Commission for Western Asia, the International Fund for Agricultural Development, the UN International Children’s Emergency Fund (UNICEF), WFP and the World Health Organization.

What is especially troubling about its findings is the impact that hunger and food insecurity is having on public health and child development. According to the report’s 2019 estimates, 22.5 percent of children under the age of 5 were stunted, 9.2 percent wasted, and 9.9 percent overweight.

Also owing to poor nutrition, 27 percent of the region’s adult population are classified as obese, making the Arab region the second-worst offender for obesity in the world. The same dietary shortcomings have left 35 percent of women of reproductive age anemic.

Conflict was found to be the leading cause of the degrading hunger situation in the Arab region. Although the report recorded a sustained decline in undernourishment in Arab countries since 2000-02, this downward trend came to a halt in 2014-16, coinciding with a significant uptick in regional violence.

Indeed, during this period, Gaza suffered almost two months under heavy Israeli bombardment, Daesh seized control of vast areas of Iraq and Syria, Libya descended into its second civil war, Iran-backed Houthis took control of Yemen’s capital Sanaa, and Somalia and Sudan both experienced renewed violence — a combination of which contributed to the biggest human displacement since the Second World War.

“The decline in food security and the fight against hunger was apparent globally since 2015, with conflict in the NENA region and other parts of the world among the main contributors to that setback,” said Elwaer.

“However, even when the direction of change in the region was still positive, between 11 and 12 percent of the adult population in NENA still suffered from hunger and severe food insecurity.”

According to the report, undernourishment in the region’s non-conflict countries has ranged between 5 and 8 percent since 2000-02. This is about two to three times that of most developed countries where undernourishment is commonly below 2.5 percent.

By contrast, comparatively peaceful Algeria has seen its prevalence of undernourishment fall consistently from 5.6 percent during 2007-09 to 3.2 in 2015-17 — and it has continued to fall since. Meanwhile, in the affluent Gulf state of Kuwait, the rate has remained consistently below 2.5 percent over the entire period.

Although it is the primary factor, conflict is not the only cause of growing hunger and food insecurity in the region. The report also highlighted the weaknesses of regional food systems, hampered by the effects of climate change, bad policymaking, and economic disruption, even before the COVID-19 pandemic.

“The full impact of the pandemic on food security in the region is difficult to assess in this report, which reflects the pre-COVID-19 situation,” said Elwaer. “However, it is safe to conclude the pandemic has further exposed regional vulnerabilities.”

Other pressures on food supply chains were found to include water scarcity, a strong dependence on imports, inequality, population growth and mass migration.

“In addition to poor policies, shocks and stresses can affect the agrifood economy to worsen hunger and nutrition. In some countries, national policies further stress resources with unsustainable groundwater extractions leading to saltwater intrusion,” he said.

“For example, Saudi Arabia in the past used to practice intensive wheat farming at a high cost to freshwater aquifers. This practice has been corrected with recent, more sustainable and effective policies.”

The high cost of healthy eating was also found to be a factor, whereby nutritious diets with plenty of fresh fruit and vegetables, pulses, meat and dairy were estimated to cost around five times more than one that meets basic energy needs through a starchy staple such as rice and bread.

Indeed, the report found that healthy diets are unaffordable for more than 50 percent of the Arab region’s population — higher than the global average of 38 percent.

Elwaer said that both conflict and non-conflict countries in the region need to pursue policies that will mitigate this wide array of challenges.

“It could seem a considerable ask of countries under the current pandemic situation. Still, food security and nutrition are key to the sustainable development agenda, which affects the well-being of populations and overall economic and social growth.” 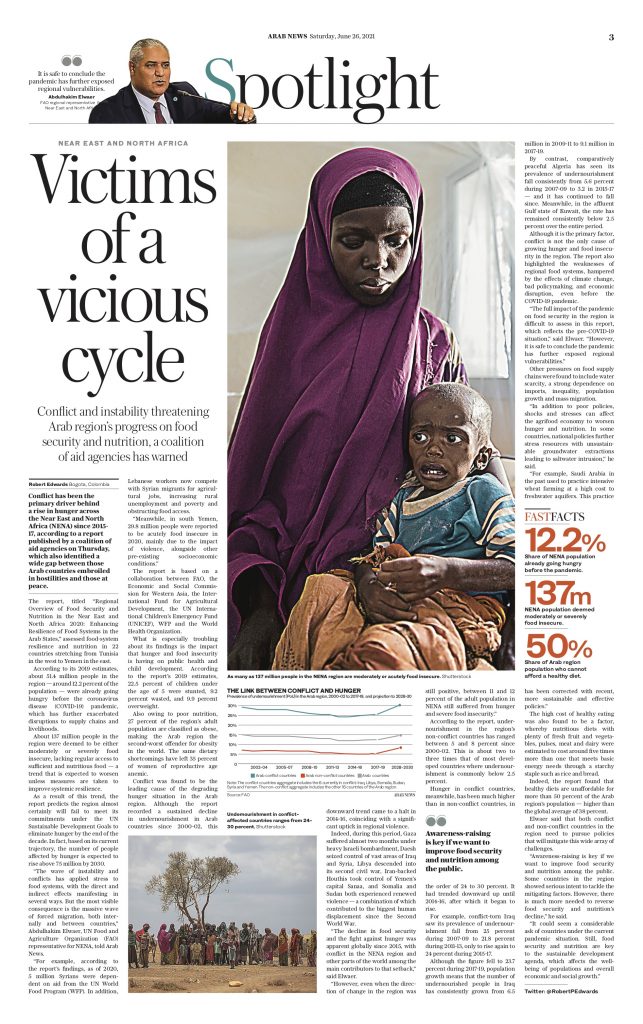