NINEVEH/IRBIL/BOGOTA: Since the collapse of Daesh’s so-called caliphate in Iraq and Syria, many Western nations have been reluctant to allow the families of fighters to return for legal, political and security reasons. But the issue is equally complicated in the two war-weary Arab countries that the “caliphate” straddled while it lasted.

More than three years after the territorial defeat of Daesh in Iraq, over one million Iraqis remain trapped in a precarious state of displacement. Those with perceived association with the terrorist group face added barriers to obtaining documentation or returning to their homes.

If their status is not resolved soon, aid agencies fear that those left stranded in Iraq’s sprawling camps risk forever being tarred as “Daesh families,” becoming a permanent underclass vulnerable to indoctrination and recruitment by organized crime or violent extremist groups.

“I did not agree with Daesh’s ideas. Since the beginning I used to fight with my husband, but he was brainwashed,” said Um Haidar, 42, who has spent the past four years in Al-Jeddah camp 5, a tent city of about 1,400 families in Iraq’s northwest Nineveh province.

“Before Daesh, my husband was a shepherd. When Daesh took control of our area, my husband joined them. He worked with Daesh as a river policeman.

“My husband wanted us to leave our village. He told me he didn’t want to harm his relatives or be harmed by them. We moved to an area called Dawr Al-Masafaa. We stayed there for a year. After we moved to Mosul. Since then, we have never been back to our village.”

Because of her husband and their son’s affiliation with Daesh, the tribal leaders who control the village of Al-Awsajah barred Um Haidar, her son’s widow and their children from returning after the liberation.

“Our house was destroyed by the people of our village. It’s gone now. Nothing is left,” she said. In the absence of a government-led peace and reconciliation effort, collective punishments of this kind are commonplace.

“I want to return to my area. I want to have reconciliation with the tribes. They don’t want us back because my husband was with Daesh,” said Um Haidar. “But he did not kill anyone.”

Hayiya Mahmoud Emdid, another camp resident, tells a similar story of guilt by association. “Three of my sons joined Daesh. I don’t know how they died,” said Emdid, originally from Imam Gharbi, a village near Nineveh’s southern town of Qayyarah. “I have been told they were killed in the Old City of Mosul.”

Like Um Haidar, she too says she had tried to reason with her relatives whipped up by Daesh’s fanaticism. “I was angry when I was told that my sons joined Daesh. But they joined to make a living for their families,” Emdid said. “I am here in the camp because of my sons — me and the wives of my sons. We tried to stop them from remaining with Daesh, but we could not.”

As a result, the village refuses to take them back. “It’s a punishment for us. We don’t know our future. Our sheikh does not want us to go back. His brothers were killed by Daesh.”

The stigma attached to these families is robbing the youngest camp residents of a normal childhood. Many are unable to renew or apply for documentation, including birth certificates required to enroll in school.

“The children here are rejected by society,” said Abdullah Hamid Salih, the mukhtar (chieftain) of Al-Jeddah camp 5, who lived under Daesh’s reign in Mosul. “When they go out of the camp, they are not accepted by society. Most of the people here can’t go back to their areas due to tribal conflicts.”

Salih, once a successful shopkeeper, has given up on returning to his former life, and instead wants the government in Baghdad to offer his wife and their five children a chance to start over somewhere entirely new.

“The best would be for the government to offer places for these families in another area, as the tribal issues will not be solved,” he said. “If the children stay in the camp, they will grow up hating the government, hating the region. It will be a new generation of Daesh.”

Daesh’s lightning advance across northern Iraq and Syria in the summer of 2014 left a trail of death and destruction in its wake.

Those who chose to remain under its rule, or were prevented from escaping, endured the cruelties of the group’s warped ideology, experienced hunger as shortages began to bite, and watched helplessly as their home towns became battlefields.

It is perhaps no surprise that those who fled, who lost their homes and whose loved ones succumbed to the group’s savagery are so reluctant to welcome back their erstwhile neighbors, now perceived as Daesh collaborators.

“I can’t protect these families if they come back. They can be attacked by other people in the village,” said Ramathan Abo Ahmed, mukhtar of Imam Gharbi.

“People would say they have family members who were killed by Daesh and until now they haven’t had compensation or a death certificate. People would not accept families that are linked to Daesh coming back.”

Some former residents have been accepted back into the community on a case-by-case basis, but the decision is not taken lightly.

“We have women whose husbands were with Daesh, but they did not support Daesh. They are living in the village,” Ahmed said. “But the ones who are still in the camps, they harmed people. These women followed their husbands when they joined Daesh.

“We thought about the children. But some of the women supported Daesh more than their men. The only way to get them back is for the tribal leaders all to agree to their return. We held a meeting with the tribal leaders and security forces of Qayyarah and the people of the area. They don’t want them back.”

This unwritten policy of guilt by association has left thousands of households in a state of limbo — unable to move forward or back.

“We are extremely concerned about the fate of families with perceived Daesh affiliation,” Belkis Wille, a senior researcher with the Conflict and Crisis division at Human Rights Watch (HRW), told Arab News.

“The authorities, in some cases, have tried to engage with tribal leaders and with communities to try and convince them to allow certain families to return home, often with limited success. In other instances, the government hasn’t really tried to do that.

“If the government were to ensure that everyone in Iraq, regardless of any family affiliation to Daesh, was able to renew their documents, then these families would be able to move to new areas — areas where they are perhaps not stigmatized (so much), larger cities where they can live with more anonymity, and within those new locations they could establish a life for themselves and reintegrate into the community.”

Even if the government resolved the issue of documentation, such families would still face opposition returning to their homes because state-led reconciliation efforts have been entirely neglected.

“The government has been extremely slow in paying out compensation to people whose property was destroyed by Daesh or by fighting against Daesh,” said Wille.

“If that compensation was coming more quickly, that might help ease tensions. There are so many other transitional justice mechanisms that could be established to allow for truth-telling, for apologizing, things that have worked in many other countries, that the government has just not invested in.

“Until those exist, the government has a limited ability in pushing tribes and communities to accept these families back.”

Adnan Al-Daraji, administrator of Al-Jeddah camp 5, says the families in his care find themselves in a unique predicament that Baghdad is working hard to resolve.

“The Iraqi government wants to end the displacement in Iraq as we are not at war anymore,” Al-Daraji said. “There is support coming from the government for people to return and leave camps. But when it comes to this camp, there is more patience as most of the families here are Daesh families.”

Al-Daraji knows Iraq’s displacement crisis cannot go on forever if the country is ever to stabilize and prosper. “The camp has to be closed at some point and people should return to their areas with dignity,” he told Arab News.

Um Haidar believes her husband was probably killed when the Daesh-run guesthouse in Deir ez-Zor in which he lived was destroyed in an airstrike. The couple had moved to the northeast Syrian province to escape the fighting in northwest Iraq.

“My son stayed in Mosul. He was with Daesh too. We stopped receiving news of my son when we moved to Syria,” she said.

As a lone parent, sick with hepatitis, Um Haidar was permitted to re-enter Iraq on humanitarian grounds. Here, she and her surviving children began their search for acceptance.

“If my children stay here in the camp, if they are rejected by their relatives and the people of their village, they will carry hatred,” she warned. “I can tell they feel this way.” 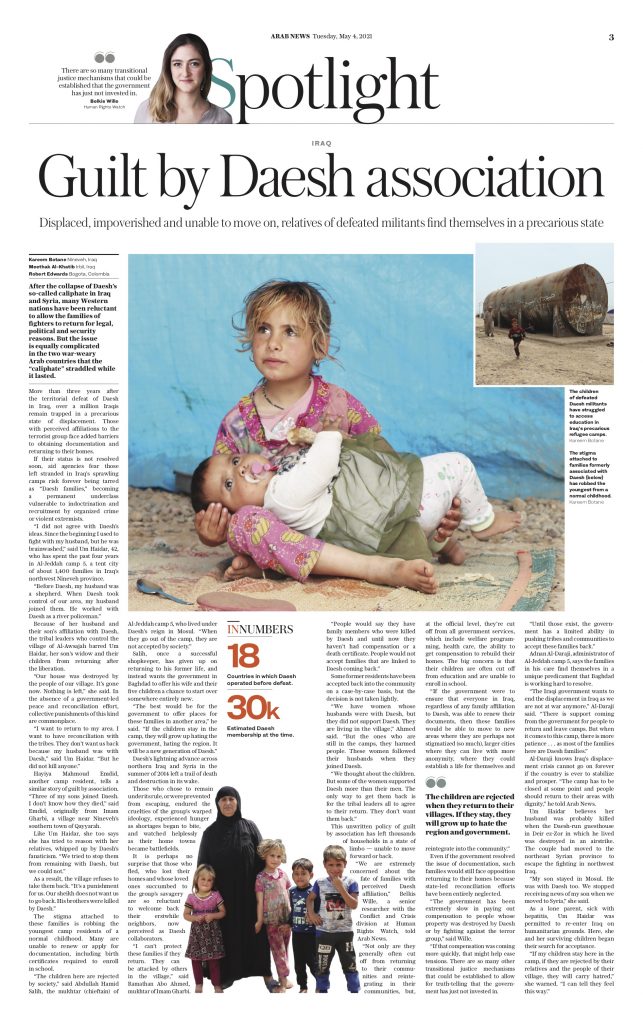 Climate change mitigation: What Saudi Arabia and Japan can learn from one another
Iraq’s protest leaders forced into hiding by pro-Iran militia death threats
Tweets by @RobertPEdwards